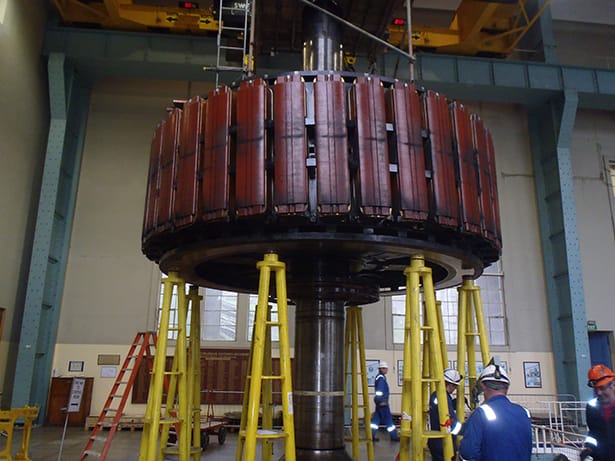 Quartzelec had the opportunity to work with a leading Irish utility company who operate across the electricity market from generation and transmission through to distribution and supply. The company currently operates 11 thermal stations, 19 windfarms, and 10 hydro stations.

Working at a hydro generating station, located on the Lower River Shannon near Limerick, the station currently supplies electricity to more than 46,000 homes.

The client initially reported a rotor earth fault, which when further investigated, revealed the need to remove the rotor and carryout a major overhaul.

Quartzelec were awarded the contract for the major overhaul of the vertical hydroelectric unit G4 generator to investigate low rotor insulation resistance.

During the overhaul of the 36 pole, 10.5kV, 31MVA Siemens generator, the exciter, bearings, brackets and turbine guide pads were all removed and the bearings all passed non-destructive testing.

Following rotor removal and inspection, it was agreed that the poles would need to be individually removed to clean the carbon and oil that was blown to the back of the poles during generation. The IR of the poles were measured where they found that 24 were below acceptance criteria, the lowest recorded being 31kΩ @ 500V. The poles were hand cleaned then electrical tested to confirm they were fit for service. Prior to reassembly the steel flange at the back of the poles were sealed using self levelling silicone sealant to prevent contamination ingress to the winding and the pole to pole connections were remade using new insulation.

The stator was cryogenically cleaned and a number of electrical tests were performed including: IR, PI, ELCID and PD TAN DELTA which indicated that the stator core and windings were in an acceptable condition. A wedge plot was conducted and revealed a number of loose wedges which were replaced with new glass fibre wedges. The exciter was removed from site to a local workshop for cleaning and overhaul which included a commutator skim, undercut and bevel. The machine passed all electrical tests along with vibration and bearing temperature checks and has now returned to service.

Both the client and Quartzelec had an excellent working relationship, working closely to required timescales and completion dates.