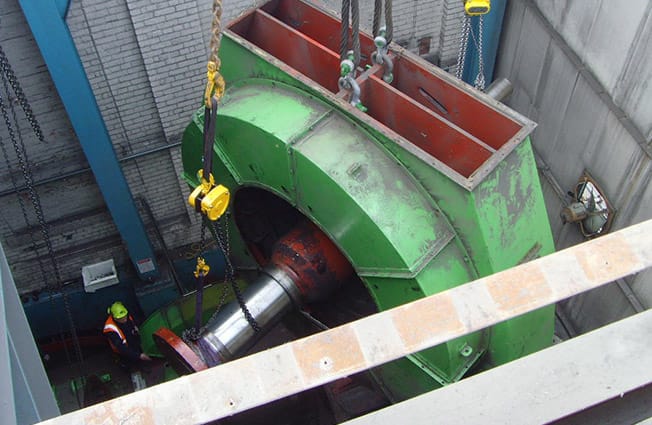 Hatfield Colliery in Doncaster, which re-opened in the last decade, experienced a breakdown in their number 3 motor-generator set, originally an AEI machine a number of years old.

Quartzelec engineers were mobilised to site and found that three bars had flashed over to earth, requiring the set to be removed and brought to Quartzelec’s Rugby workshop for more detailed analysis.

Upon initial investigation engineers discovered that three bars on the aging but still viable Metropolitan Vickers manufactured machine had flashed over to earth. As the problem could not be resolved onsite the solution was to remove the set and transport the unit back to Quartzelec’s repair facilities in Rugby for more detailed analysis.

The machine however was so tightly installed in its confined space there was no way that it could be extricated by conventional means … through the door. Working with the customer, we used a crane to remove the motor out of the roof.

A full and thorough inspection was then carried out by Quartzelec with a number of comprehensive tests to establish the full extent of the damage and the best course of action to rectify the problem.

Two options were put forward; to either repair the broken bars or undertake a full rewind. The customer decided that the full rewind would in the long run prove the most cost effective option as it would ensure the viability of the motor-generator for many more years to come.

Without access to the machine’s original design records, Quartzelec were required to reverse-engineer drawings in order to carry out the work.