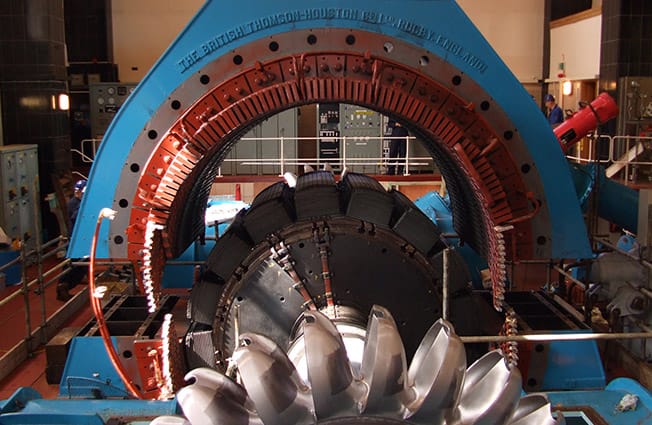 Finlarig Power Station is part of the Scottish Hydro Electric Power Scheme and is located on the shores of Loch Tay.

The AC Generator at the power station was due for the 24 years overhaul which also included an upgrade to the exciter to brushless and overhaul of the rotor pole insulation. This will establish the integrity of the generator components and identify if any corrective work is required to ensure the future reliability of the generator.

Situated in the generator hall, the station overhead crane was required to lift all the generator components. The generator, turbine and associated shaft components were dismantled to allow for rotor removal.

Once removed, the rotor was inspected and the client was advised that the rotor should be transported to the Quartzelec Rugby workshop. Quartzelec had to consider the weight and size of the rotor. Weighing in at a massive 95 tones, transport to and from the power station was of paramount importance, with only certain routes permitted.

At the workshop, the rotor poles were removed for cleaning using the cryogenic decontamination method and re-insulated. Inspection also identified that the springs under the rotor poles required changing. The exciter was then removed and transported to the Quartzelec Rugby workshop and conversion to brushless design and the complete exciter was replaced.

The stator was inspected and cryogenically decontaminated and Tan Delta and Partial Discharge tests were carried out with all results being satisfactory. The rotor was cleaned and Non-Destructive testing was performed on the journals and bearings.

All parts were suitably packaged and transported back to site where the generator was re-assembled and final electrical tests were carried out.

With the experience in working on generators, the original OEM information and drawings along with the winding expertise to disconnect the stator to remove the rotor, Quartzelec were able to deliver a quality job, satisfying client expectations.